The Keyes KY-040 rotary encoder is a rotary input device (as in knob) that provides an indication of how much the knob has been rotated AND what direction it is rotating in.

It’s a great device for stepper and servo motor control.  You could also use it to control devices like digital potentiometers.

A rotary encoder has a fixed number of positions per revolution.   These positions are easily felt as small “clicks” you turn the encoder.  The Keyes module that we have has thirty of these positions.

On one side of the switch there are three pins.   They are normally referred to as A, B and C.   In the case of the KY-040,  they are oriented as shown.

In each encoder position, both switches are either opened or closed.  Each click causes these switches to change states as follows:

The illustration below is representative of how the switch is constructed: 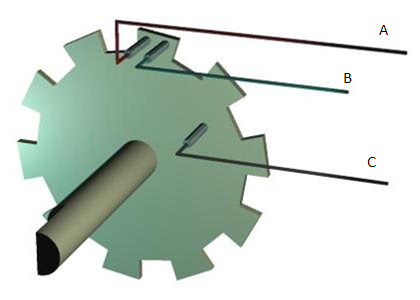 As you can see, the angular position of the A terminal and the B terminal is such that:

If we were to represent the opening an closing of the switches as wave forms, it would look something like this: Essentially,   determining which switch changed states first is how the direction of rotation is determined.

If A changed states first, the switch is rotating in a clockwise direction.

If B changed states first, the switch is rotating in a counter clockwise direction.

The pin outs for this rotary encoder are identified in the illustration below:

The low is generated by placing a ground at Pin C and passing it to the CLK and DT pins when switches are closed.

The high is generated with a 5V supply input and pullup resistors, such that CLK and DT are both high when switches are open.

Not previously mentioned is the existence of of push button switch that is integral to the encoder.   If you push on the shaft, a normally open switch will close.  The feature is useful if you want to change switch function.   For example,  you may wish to have the ability to between coarse and fine adjustments.

A schematic for this module is provided below.   R2 and R3 in the schematic are pull up resistors. 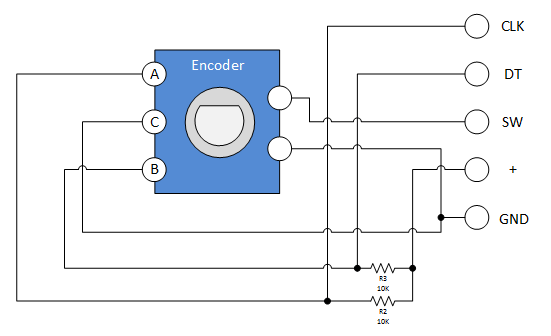 Successfully implementing the Rotary Encoder into any project requires a clear understanding of everything that has been discussed thus far.  If you’re still a little fuzzy,  you may wish to throw together the evaluation circuit illustrated below: 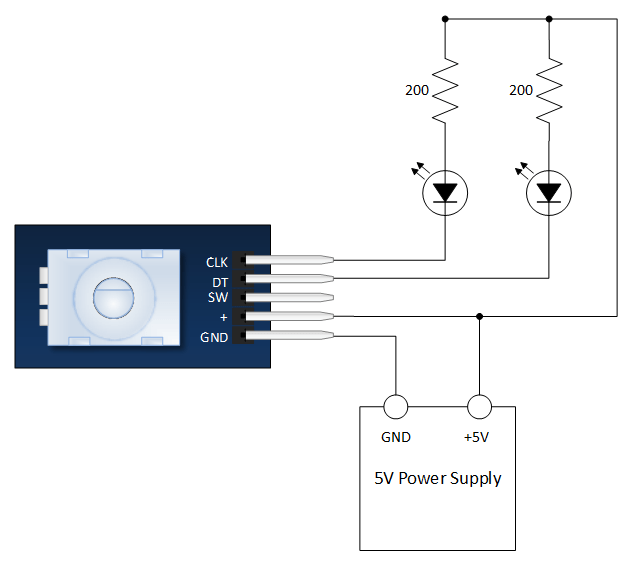 Module Connection to the Arduino

Pretty straight forward…   All you need to do is connect four wires to the module. 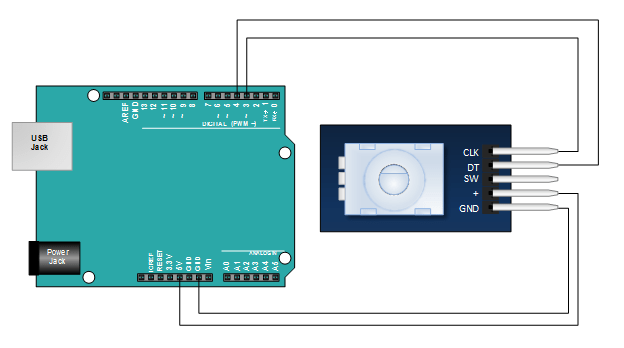 This is  a simple sketch that shows how to count the encoder position and how to determine direction of rotation.    It has no switch debounce,  nor does it use interrupts.    A fully developed application might need to incorporate these in order to make it robust.